Welcome back, Readers. On Wednesday’s part two of this three-part look at the founding documents of the United States, we explored the Articles of Confederation, which established a governmental structure in the years immediately following America’s independence from Britain. It’s taken me a few days to figure out the best way to do this, as it’s such a large document, but today we will look at the Constitution, the supreme law of the United States. Excerpts will be taken from the full transcript, as found at the National Archives website. 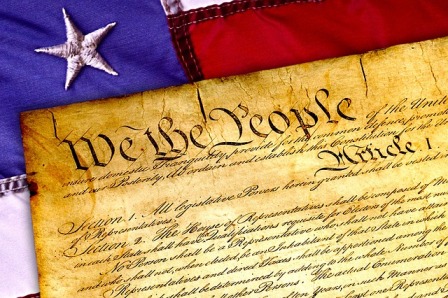 After the issues with the Articles of Confederation resulted in a government that was essentially paralyzed, a Constitutional Convention was called in Philadelphia in 1787, where it was hoped that the Articles could be amended to satisfaction. When this failed, the Framers set about drafting a new document, one that would mitigate the problems of an extremely weak federal government while preserving the ideals of liberty and republicanism. The Preamble (introduction), perhaps the most famous part of the Constitution, sets out the document’s purpose in soaring tones:

We the People of the United States, in Order to form a more perfect Union, establish Justice, insure domestic Tranquility, provide for the common defence, promote the general Welfare, and secure the Blessings of Liberty to ourselves and our Posterity, do ordain and establish this Constitution for the United States of America.

The Preamble makes clear that the laws of the government come from the people of the nation themselves, and not from a king or distant parliament as had been done during the Colonial Era. Ratified in 1788, the seven articles that make up the original, unamended Constitution lay out the structure and powers of the new system of  government.

Articles 1-3 describe the Legislature (House of Representatives and Senate), Executive (Office of the President), and Judiciary (federal court system, including the Supreme Court) branches, and the powers that they will have.

Article 4 outlines how the federal government will relate to the states. Provisions are made for the creation of new states, freedom of movement between states, and the guarantee of a republican form of government in all states under the new government. It is this last provision which allows the federal government to sent troops into a state to preserve or restore law and order, such as took place during Reconstruction following the Civil War.

Article 6 does three things: it declares the debts of the old Confederation to be the responsibility of the new United States government; makes itself the supreme law of the United States (called the “supremacy clause”), which insures that all laws created by the states and all decisions made by the Supreme Court are bound, first and foremost, by the Constitution; finally, Article 6 establishes that an Oath (or Affirmation) to defend the Constitution of the United States must be taken by any state or federal official, but that no religious test for office shall ever be required.

Article 7, finally, established that the new Constitution would go into effect when nine of the thirteen states ratified (approved) it.

Besides the Preamble, perhaps the most famous part of the Constitution is the Bill of Rights, the first ten amendments to the Constitution, ratified as a group in 1791. These ten amendments are often considered the cornerstone of freedom in the United States, and guarantee various civil liberties. As a summary, those liberties guaranteed by the Bill of Rights include:

In addition to the above summary, I’ve reprinted the entire Bill of Rights here for you to read if you wish:

Congress shall make no law respecting an establishment of religion, or prohibiting the free exercise thereof; or abridging the freedom of speech, or of the press; or the right of the people peaceably to assemble, and to petition the Government for a redress of grievances.

A well regulated Militia, being necessary to the security of a free State, the right of the people to keep and bear Arms, shall not be infringed.

No Soldier shall, in time of peace be quartered in any house, without the consent of the Owner, nor in time of war, but in a manner to be prescribed by law.

The right of the people to be secure in their persons, houses, papers, and effects, against unreasonable searches and seizures, shall not be violated, and no Warrants shall issue, but upon probable cause, supported by Oath or affirmation, and particularly describing the place to be searched, and the persons or things to be seized.

No person shall be held to answer for a capital, or otherwise infamous crime, unless on a presentment or indictment of a Grand Jury, except in cases arising in the land or naval forces, or in the Militia, when in actual service in time of War or public danger; nor shall any person be subject for the same offence to be twice put in jeopardy of life or limb; nor shall be compelled in any criminal case to be a witness against himself, nor be deprived of life, liberty, or property, without due process of law; nor shall private property be taken for public use, without just compensation.

In all criminal prosecutions, the accused shall enjoy the right to a speedy and public trial, by an impartial jury of the State and district wherein the crime shall have been committed, which district shall have been previously ascertained by law, and to be informed of the nature and cause of the accusation; to be confronted with the witnesses against him; to have compulsory process for obtaining witnesses in his favor, and to have the Assistance of Counsel for his defence.

In Suits at common law, where the value in controversy shall exceed twenty dollars, the right of trial by jury shall be preserved, and no fact tried by a jury, shall be otherwise re-examined in any Court of the United States, than according to the rules of the common law.

Excessive bail shall not be required, nor excessive fines imposed, nor cruel and unusual punishments inflicted.

The enumeration in the Constitution, of certain rights, shall not be construed to deny or disparage others retained by the people.

The powers not delegated to the United States by the Constitution, nor prohibited by it to the States, are reserved to the States respectively, or to the people.

So, we’ve come to the end of our Independence Week celebration! I hope you’ve enjoyed this little detour into an exploration of the founding documents of the United States. Expect a return to our regularly scheduled programming later this week.